It was unknowable then, but so much of the progress that would define the 20th century, on both sides of the Atlantic, came down to the battle for a slice of beach only six miles long and two miles wide. President Barack Obama

June 6, 1944, seventy-five years ago today, was the largest seaborne invasion in military history. The landings on Normandy Beach were initiated by the Western Allies in an effort to liberate mainland Europe from Hitler’s reign and Nazi occupation during World War II. The Allied infantry began landing on the coast of France at 6:30 a.m. and by midnight, over 150,000 British, U.S. and Canadian troops had landed in Normandy.

D-Day was a massacre with about 9,000 Allied soldiers either dead or wounded. Even with the massive losses, D-Day enabled the Allied forces to gain momentum and turn the tide toward liberation.

Affirmation: I will not forget. I will never give up on my goals, dreams, and the ongoing fight for freedom.

Coaching questions: What are you tempted to give up on? How does this 75-year-old story help you renew your drive to move forward and never give up? Where will you land? 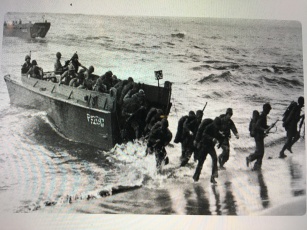